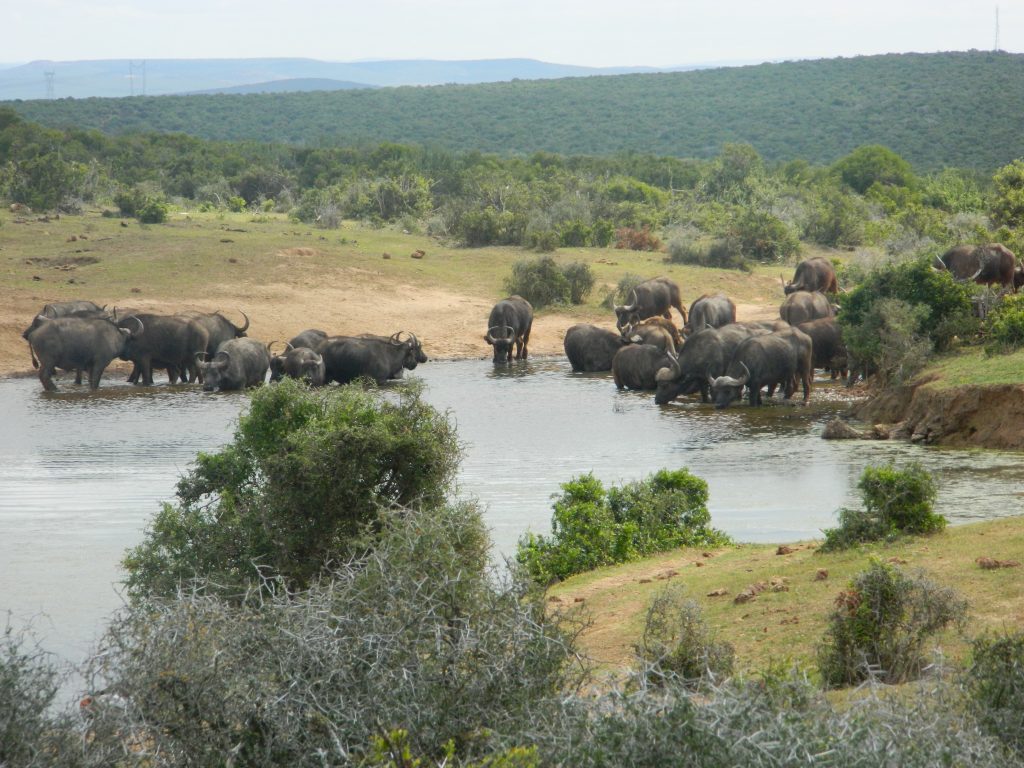 One of the major, but far lesser known or appreciated attractions of the Addo Elephant National Park, is the diversity of its different biomes.

What is a biome?

A biome can be defined as a naturally occurring community of flora and fauna which is adapted to the particular conditions in which it occurs. They can be found over a range of continents. Biomes are distinct biological communities that have formed in response to a shared physical climate.

Very few parks, if any, can offer visitors the variety of vegetation, geology, mammals and even weather patterns that Addo has to offer. Addo encompasses 5 of South Africa’s 7 biomes, namely Albany Thicket, Forest, Fynbos, Nama Karoo, and the Indian Ocean Coastal Belt.

Albany Thicket, sometimes called valley bushveld, dominates the original Addo section. It also covers large parts of the Kabouga, Colchester and Nyathi sections. Due to its rich plant variety, it supports over 48 species of medium to large mammals. The thicket contains 112 different vegetation types, 20% of which are endemic and can’t be found anywhere else. Each vegetation type consist of unique plants species which have the ability to adapt and withstand the variations of the valley’s temperatures, with unpredictable rainfall, often dry conditions and temperatures from 7°C to over 40°C. They also have the ability to tolerate harsh disturbance by trampling animals, such as elephants. The plants drop and re-root quickly, forming new plants.

Fynbos is found in the Zuurberg section with Forest occurring in the Woody Cape are and Zuurberg section. It occupies over 5% of South Africa, with 68% of the plants being endemic. It is recognized as one of the most diverse and distinctive floras in the world. Trees are rare and grass forms a relatively small part of the biome. Proteas, ericas and restios are typical components of fynbos. Finely wooded fynbos plants are obligate seeds, which means the whole plant dies after fire and can only reproduce through seed. Fire is a very important component in Fynbos. Most Fynbos is highly flammable due to the common presence of flammable oils.

A relatively small area of Nama Karoo occurs in the Kuzuko Contractual Area of the Park, adjacent to Darlington dam, in the rain shadow of the Zuurberg Mountains. The Western and Northern Cape provinces are mostly covered by the Nama Karoo biome. It is a complex mix of grass and shrug dominated vegetation types growing on shale, quartzite and sandstone. A rich variety of rodents and reptiles occur in the Nama-Karoo.

The two types of forests found in the Park are the Southern Coastal Forest in Woody Cape and the Southern Mistbelt Forest in the Zuurberg Mountains. The Alexandria forest (Woody Cape) and Zuurberg forest carry high conservation status. Forest is highly threatened with only 5% of the original extent under formal conservation. Despite the small land surface area that they occupy, forests have relatively high species richness with only fynbos exceeding this.

The Indian Ocean Coastal Belt on the seaward side contains a remarkable display of coastal dunes and coastal grassy plains. The Alexandria dunefield is the largest and least degraded dunefield in the southern hemisphere. It has a maximum width of 3km with average heights of 30m. The tallest dune is 140m above sea level. The dunefield gets about 3mm thicker each year.

In these 5 biomes, 43 distinct land classes have been mapped. 29 of the 43 land classed have been identified as experiencing a high level of threat which has been a major motivation for the expansion of the Park. Potential threats include grazing, agriculture, alien plants infestation, mining and human settlements. Addo is the only nationally protected area which conserves thicket.

We would be happy to share our knowledge and to tell you how you can learn more about the biomes. Best of course is to experience it for yourself. Contact our friendly staff at Chrislin for information on how to do so.