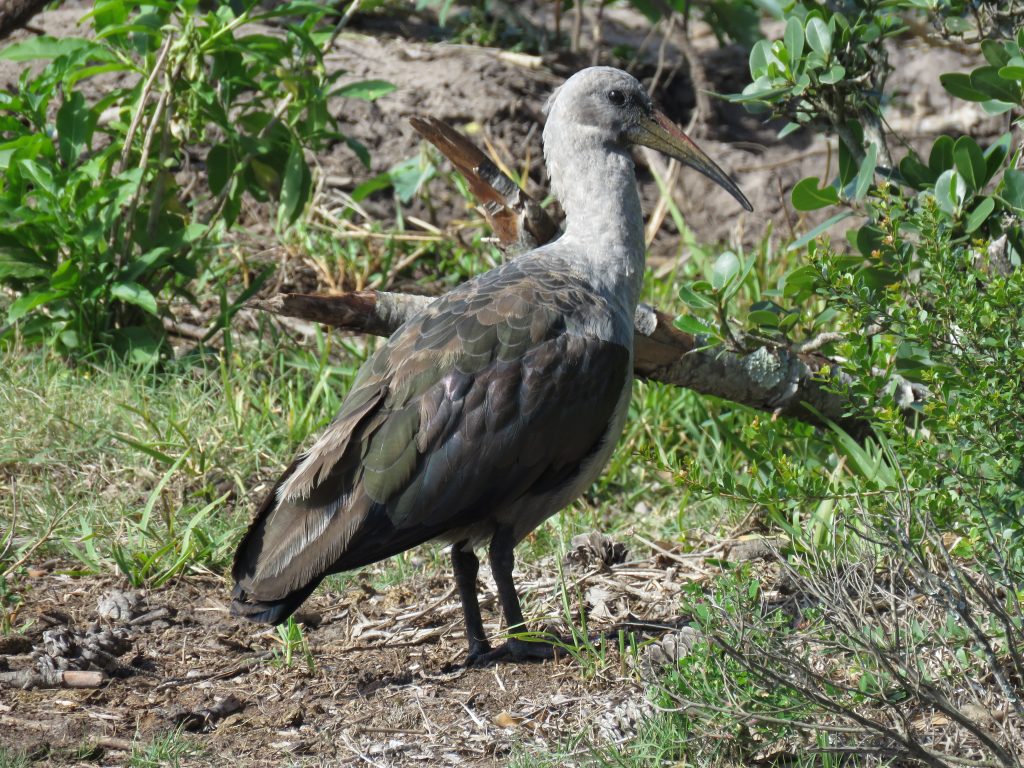 Chrislin African Lodge guests often ask, “What is that noisy bird?” We immediately know that the bird they are referring to is the hadeda ibis. The name is an imitation of its call, a loud and distinctive “haa-haa-haa-de-dah”.

This large bird can reach over 70cm in length and can weigh up 1.3 kilograms. It is a dull dark grey colour with a purple or green metallic reflection on its wings in good light. It has a large grey-black bill which has a red line on the upper mandible during breeding season. It has blackish legs.

The loud, raucous and distinctive “haa-haa-de-dah” call of the hadeda ibis can usually be heard when the birds are flying, when startled or when communicating. When roosting, their call is a single “haa” sound. Their call is often heard by all at Chrislin in the early hours of the morning!

The hadeda ibis is widely distributed across South Africa, with the exception of arid areas such as the Karoo. With the introduction of more trees and irrigation in our Addo region, the population of these birds has rapidly increased. 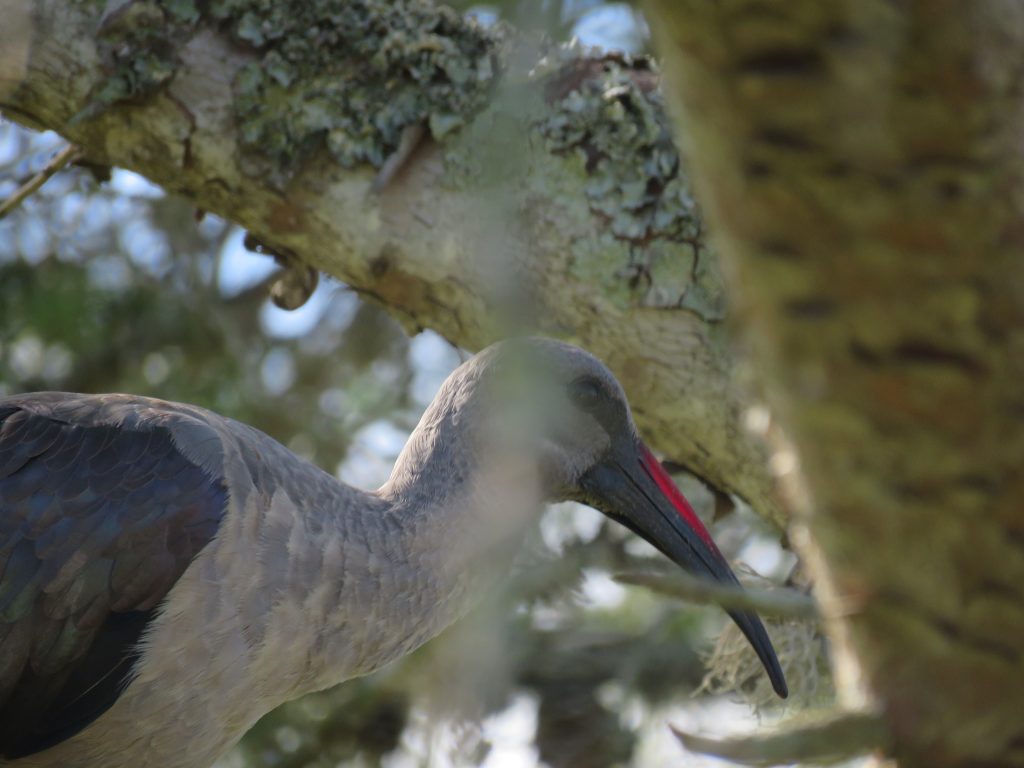 While this noisy bird species is listed as “least concern” on the ICUN Red List of Threatened Species, it is still threatened in many ways. The hadeda ibis are preyed on by the African crowned eagle and the sparrow hawk. The recent drought has reduced their ability to find food and due to hunting, poisoning and loss of habitat, humans remain their biggest threat. In Nigeria, parts of this bird are sometimes traded at traditional medicine markets.

The nest of a hadeda ibis is basket-shaped and constructed from sticks and twigs and lined with grass. The material for the nest is gathered by the male and then ceremoniously offered to its mate. Nests can be found in tree branches, telephone poles, dam walls or in bushes.

The hadeda ibis, unlike other ibis species, is monogamous and breeds in solitary pairs. Breeding generally peaks during or just after the rainy season, which in South Africa is between late winter and early summer. They lay between one and six eggs, which are green in colour. Both the male and female incubate the eggs and feed the chicks regurgitated food. Hatching occurs after about 28 days. The young are completely independent by the time they are 40 days old. The life expectancy of the hadeda ibis is up to 20 years.

This is a carnivorous bird that feeds mainly on insects. Its diet can also include crustaceans, spiders, earthworms, snails, small reptiles, fish and even carrion. Food is located by either sight or touch. Though this noisy bird is nicknamed the “flying vuvuzella” it is a helpful species to have in our garden, and especially the big garden we have here at Chrislin Lodge. 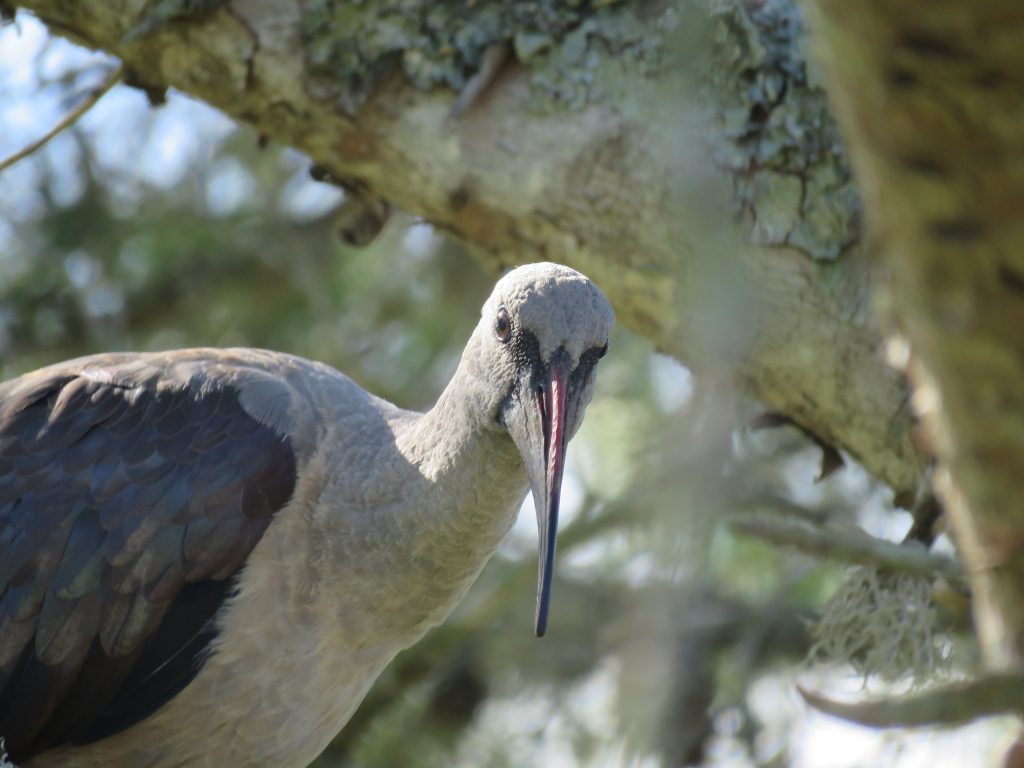 If you would like to find out about the many birds in the Addo region and at Chrislin African Lodge please contact us via email on info@chrislin.co.za or use our contact form. We would love you to meet the noisy hadeda ibis and over 300 other birds that can be seen at different times of the year.