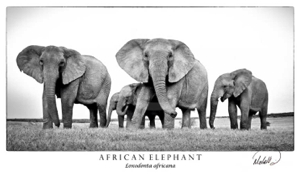 “Listen, I’m driving down Grass Ridge from Port Elizabeth towards Addo and I’ve just received a call from River Bend Lodge saying the Elephants are close to the Lodge. Come now! I’ll meet you there!”

Michael Price, a photographer amongst many talents, and I were due to meet at the local Wine Bar at 5pm. The fact that I got this call at all is incredible as I was sipping an afternoon cup of tea with my Addo friend, Stef and her daughter, and her area has virtually no reception. First good sign.

With dust clouds billowing behind me I arrived at the River Bend, which is situated in a conservancy of the Addo Elephant National Park, and jumped on the game viewer, camera in hand. Only to feel like the complete novice that I am next to Michael and his various sizeable pieces of photographic equipment! We bumped along to an area named Mpofu Plain’s and had the most beautiful Addo Elephant viewing. A little guy, trailing behind the herd, came running towards us to catch up to the herd. As we were in his path, he trumpeted, flapped his ears, eyed us without losing any pace and swerved around the vehicle to join his family. Some great shots were captured by Michael. Driving a little further, Michael brought me up to speed on Manual settings, ISO, shutter speeds, angles, fixed focal lenses and patience. The Elephants posed for the camera and were the perfect models.

Michael Price is Addo’s new hot-off-the-press photographer. His venture started in 1981 when he was in Ireland on a stud farm, Coolmore, and bought a camera to record his travels. The realisation of a long held dream of becoming a proficient photographer came in the 90’s when his son, James Price, was selected for the St Andrew’s 1st Cricket 11. Michael’s uncle and godfather, John Bridgman, passed away and bequeathed him enough money to invest in his first DSLR – a Canon450D. A fortunate encounter on a Cricket Tour with his son to Johannesburg created an opportunity to try out a Canon 300mm f2.8 lens….and Michael, after becoming very frustrated with kit lenses…found the first key to getting ‘tack sharp’ images! One such image from that Tournament was used on the front cover of SA School Sports magazine. Through extra courses with Pine and Simon Pienaar, a Landscape Photography Course with renowned Hougaard Malan, a Photography Diploma done online with the Photography Institute and just recently a Food Photography Diploma (also the Photograohy Institute) and a Food Photography Course with well known and widely published Samantha Linsell and Russell Wasserfal Michael has increased his technical knowledge. This passion he has for Photography was evident as we sat enthralled by the spectacle of the magnificent Pachyderms around us.

Michael credits Stan Blumberg as his self appointed mentor, and along with Craig Chambers (another local Photographer) and the people mentioned above have been influential in setting him on a course which should hopefully culminate in a unique style! His own words of advice to me, collected from all his mentors, were preparation, planning, patience…and learn your subject. This was evident with the young elephant charging at us earlier!

Michael’s photographs are among my absolute favourite and the title names always intrigue me. Stan Blumberg once said to him that when he is photographing, he never presses the shutter until he has a name.

After showing me some of the photos from the game drive, his final comment was, “And that’s the quick part”. I shall leave him for the editing process and wait with baited breath for the finalised photo, and name.

(He is not to be confused with Michael I. Price, from USA. This Michael Price is our very own, from Addo!)