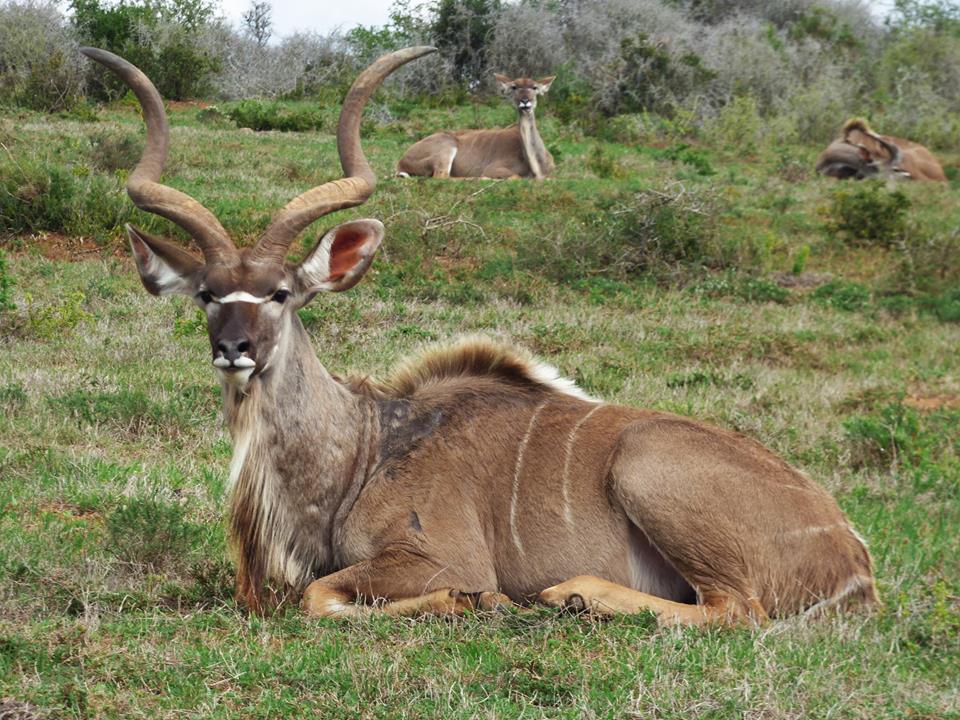 You can see kudu in the Addo Elephant National Park, located 15 minutes from Chrislin African Lodge. Kudu are one of the most common species of antelope in South Africa. They can be found in national parks as well as most private game reserves. Kudu prefer bush thickets, bushveld, wooded savannah areas, hills and areas with trees on the slopes of mountains. They are not territorial animals and will move from area to area.

The male kudu is the animal used in the South African National Parks logo. According to SANParks, the kudu is the most majestic, elegant and magnificent animal. SANParks also has Kudu Awards to recognize those who deserve thanks for their efforts in making SANParks a better organization.

The kudu mating season normally occurs between May and August. A female kudu has a gestation period of about eight months and she usually gives birth to a single calf. Pregnant females will leave the group to give birth. They hide their newborns in vegetation for up to five weeks to protect them from predators. After about five weeks, the young kudu calf will accompany its mother and join the herd again.

Predators of Kudu in Addo

The natural enemies of the kudu in Addo Elephant National Park include lion, leopard and spotted hyena. Kudus can live for around 20 years and are listed as “least concern” in terms of their conservation status.

Are Kudu Hunted in Addo?

Kudu are one of the most hunted species in South Africa. No hunting is allowed in the Addo Elephant National Park. Kudu can be hunted on some surrounding Addo reserves. The animals are mostly hunted for their meat, often to make biltong (dried meat). Kudu meat is very dry and lean and the low fat content makes it one of the healthiest meats.

These antelope are not only hunted for their meat but also for their horns. Kudu bulls have long and twisted horns which are sought after by trophy hunters. The horns are also used by locals in rituals or to make instruments.

When You See a Kudu…

These are the distinctive features to look out for when you think you see a kudu in Addo.

Kudus are a large antelope that stand around 150 cm tall at the shoulder. Their coats can be varying shades of brown. They have a distinctive white stripe down the middle of their backs and 6-10 white stripes down their sides.

Female kudus do not have horns but males have long and twisted horns. The male’s horns start to grow when they are 6 -12 months old. They can reach an average length of 120 cm when straightened. A mature kudu bull’s horns will have two and a half twists, sometimes even three full twists. The record horn length measured is 187.64 cm.

These antelopes are rather deft and can jump fences over three meters high. When taking flight, the males will lean their horns backwards to avoid having them caught in branches. They sometimes reveal the white under their tails as a signal the rest of the herd to follow.

Males do not often fight, but when they do their horns can interlock. Consequently, if they are unable to free themselves, they can die if attacked by a predator or they may starve.

A group of kudus is called a herd and mainly consists of females with their young. Herds can be up to 25 females and calves. Males stay in small bachelor herds or remain solitary.

The sport of Kudu dung-spitting (“bokdrol spoeg” in Afrikaans) was formalized in 1994. It is particularly popular in Afrikaans communities in South Africa. Contests are often held at festivals or community events. The aim is to see who can spit the kudu dung, formed into a small and hard pellets, the farthest. The world record is 15.56 meters and was set by Shaun van Rensburg in 2006. He is originally from Addo.

Kudu are easy to see in Addo Elephant National Park and surrounding private game reserves. Learn more about them while on a guided tour with one of our knowledgeable guides. Contact us to book your stay and see kudu and other wildlife in Addo.