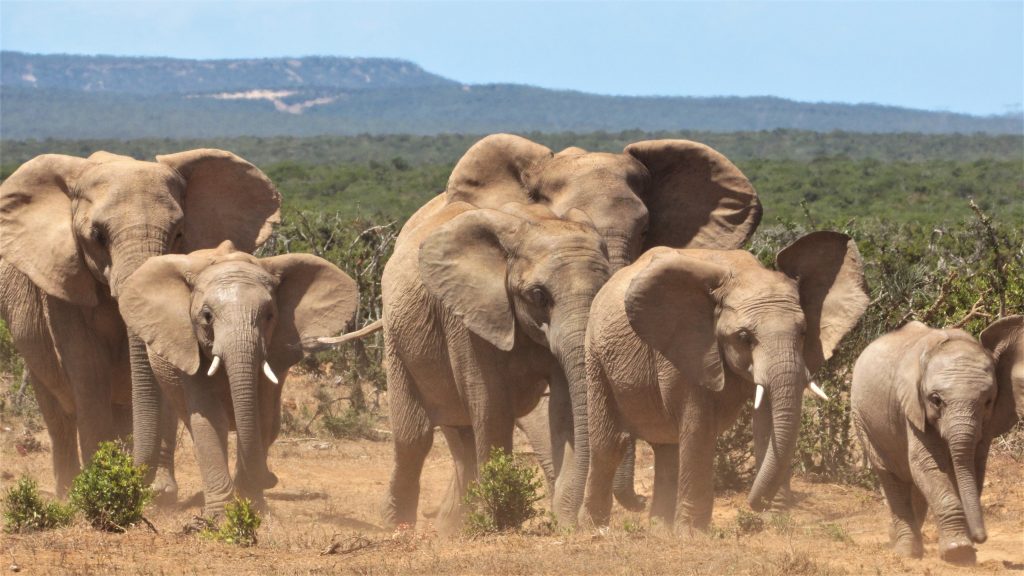 Before we get to the part about the evolution of tuskless elephants, there are other ways to differentiate between male and female elephants aside from the obvious presence of tusks. Generally, males are significantly larger and can be found in small groups or alone. Females are always found in breeding herds. Another way to differentiate the two sexes would be to look at the angle of the head. Males have rounded heads whereas females have more angled heads. Males also have a straighter back profile. The females also have two enlarged mammary glands between their front legs.

In actual fact, tusks are really just overgrown teeth, but the work that elephants do with their tusks are beneficial to other animals, too. Elephants use their tusks daily for tasks such as digging for food and water, especially in the dry seasons, and debarking trees. For creatures such as certain lizards, the debarked tree becomes their home and allows them to exist.

Now, why do some female elephants in the Addo Elephant National Park near to Chrislin African Lodge, have tusks and some not? The general answer would be a response to the levels of pressure from ivory poaching. Naturally, big tuskers are the more obvious choice when hunting which means that the smaller tuskers survived and were left to do the breeding with substantial genetic influence.

Fortunately in the nearby Addo Elephant National Park, the majority of the vegetation is shrubs and succulent plants which means that there’s not much need for Addo elephants to have huge tusks.

In the early 2000s, eight elephant bulls were introduced into Addo park from the Kruger National Park to help improve the genetic diversity of the Addo elephant. Since then, most of them have unfortunately died, including the famous “Vali Moosa” who was tragically killed in a fight with another bull in December 2018. Apparently only two of these bulls are left.

In September 2019, a new male tusker was introduced into Addo park. His name is Tembe and he is easily recognisable with a staggering shoulder height of 3.18 meters and tusks measured at an astonishing 1.39 meters from the lip out (although it wasn’t long before he lost a piece of the end of his left tusk). He is 35 years old and estimated to weigh around 6 tonnes. He was imported from the Tembe Elephant Park and will be joined by two other bulls by the end of the 2019. Tembe elephants are famous for their large tusks and the hope is that the introduction of these bulls will improve the genetic diversity of the elephant population within the Addo Elephant National Park.

It is already evident while out in the park searching for elephants, that the introduction of the bulls from the Kruger National Park, has improved the genetic diversity.

Let’s see how many female tuskers you can spot during your visit to the Addo Elephant National Park while staying with us at Chrislin Lodge. You can find all the information you need when contacting us at Chrislin African Lodge to plan and book your stay.