Darren Kleinhans, from Addo, Eastern Cape, came to talk to guests at Chrislin African Lodge. It’s fascinating how one can live in an area for so long and still be so unaware of what is around us. And what people do.

Darren works with Eskom (South Africa’s national electricity supplier) to try save birds who die as a result of the power lines and educate on snakes and birds of prey. Did you know that vultures are closer to extinction than rhino? That there is an African superstition that owls are bad luck and they are therefore killed? Power lines in the northern Eastern Cape, King Williams town and Queenstown area are littered with owls and, worst of all, Cape Vultures. There are less than 5000 cape vultures left in the wild. Darren enlightened us on the wind turbines on nearby Grass Ridge. Apparently these wind turbines do not affect birds of prey at all, however bats are taking strain. The birds see these wind turbines, and thus avoid collision but the bats are affected by the sonar waves they give off. So, basically, mid-flight, and not even near to smacking into these turbines, the lungs of these little bats basically pop, and they die mid-flight. He also elaborated on snakes in our area. There are over 200 species of snakes in South Africa but only 15 are venomous, only 6 deadly. You have more chances of dying from a car accident or bees than a snake bite! Although, the Cape Cobra is a very dangerous snake and is very common in Addo…

Darren then brought out a puffy on site. Puffadder snakes have Cytotoxic venom….aka flesh eating. Venom can be ingested, it can’t take any effect unless it comes into contact with blood. Puffadders strike incredibly fast…they can strike a balloon twice before it has popped. 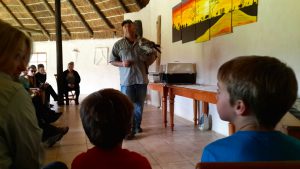 Terri and her nephews, Tristan & Ross, listening to Darren talk about owls